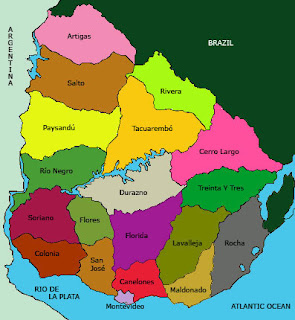 
More than 176.000 km2 of slightly rolling countryside. Located at 30º south of the
Equator, Uruguay is a green retreat between the Atlantic Ocean and the basin of the Plata
River.
An even climate within the country allow for varied, year-round activities. From its hills
– the highest point is Cerro Catedral (514 m) - and vast prairies, you can always gaze as far as
the horizon.
The country of rivers

Uruguay is a fresh water paradise. A dense hydrographic network of rivers, streams
and coastal lakes shapes the landscape. Gentle hills divide the valleys of the larger rivers and
tens of tributaries irrigate a vast natural prairie.
To the south is the Río de la Plata: “a river as wide as the sea”, as the natives called it.
There are many kilometers of uninterrupted coastline - from Colonia to Rocha – lined by
endless white sand beaches.
The marshlands of eastern Uruguay have been declared a “Biosphere Reserve” by
UNESCO. These wetlands provide a habitat for an ample diversity of birds and also a
stop-over point for migrating species. The largest population of two birds, the Flamingo
and the Black-necked swan, can be found here.

You can enjoy rural tourism and step into the boots of a “gaucho” for a few days and feel
the freedom of these vast plains in more than one hundred “estancias” (ranches). Relatively
short distances allow tourists to reach any point in the country in a few hours drive.
Ombú forest
Hundreds of 500 year old ombúes, up to 2 mts in diameter is an unusual natural phenomenon
found in the Department of Rocha.
Palm trees
The palm tree trail crosses the Uruguayan territory, from the west to east, some of which
are 300 years old. Find out the story behind it.
Fauna

The richness in bird species – more than 400 – makes our land a special destination for
researchers and bird watchers. Observatories in specific areas make possible for every one to
get a close view of birds.
The islets that surround Cabo Polonio in the Departamento of Rocha and the group of
Atlantic islands which spread southwards are a favourite haunt of sea lions and elephant
seals. For example, on the Isla de Lobos, there are about 200.000 of them.
In all, they make up one of the largest sea lion populations in the world. Also, from the
shore you will be able to enjoy whale watching. Every year, between July and November, the
Southern Right Whale surprises us as it migrates towards these latitudes. 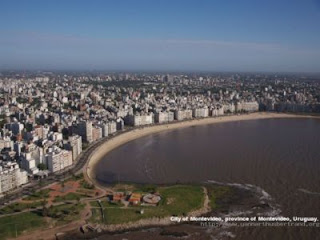 Along the Uruguay River, hot springs with different temperatures, surrounded by
natural landscape are ideal for a healthy holiday, besides offering healing properties.
History

As a key point, located at the entrance of the rivers that lead to the heart of the continent,
this area had to face invasions once and again. A set of fortresses in Montevideo and Rocha
will help you revive old times.
The people

Montevideo is the capital city, with 1.300.000 inhabitants – almost one half the population
of the country.
Uruguayans come mostly from European immigrants: Spaniards, Italians, and others. 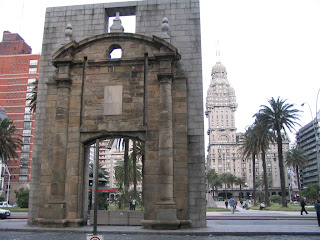 The vast majority of the people are white. Black and their descendants make up less than 5 %,
and there is no indigenous population. The official language is Spanish.
All religions are practised freely. Although there is no official religion, most of the
population is non-practising Catholic.
Uruguay is one of the safest countries in South America and it is free from health barriers.
European culture has influenced all of the Plata River area. Conquered by the Portuguese
and the Spaniards as from 1516, Uruguay became an independent nation in 1825.


Many colonial attractions will remind you of those days. Picturesque Colonia del
Sacramento, - the first formal settlement in the country, founded by the Portuguese in 1680 –


has been declared “World Heritage Town” by UNESCO.